You are here: Home / Bikes / Cyclocross Commuter Bikes – The Things You Need to Know

If you’re new to cycling, the word ‘cyclocross’ might be a bit unfamiliar, but fear not. Cyclocross is a niche subcategory cycle racing, usually taken up by racers in the winter months.

Cyclocross, or CX, is a specialised type of bike racing. The races generally occur off-road but the course terrain varies and includes sections of tarmac, grass, gravel and mud. The race course is also usually littered with unrideable obstacles like low fences, short steep hills and sections of steps. The obstacles force the rider to frequently dismount and carry the bike.

So what's this got to do with commuting?

Well, the bikes used for cyclocross racing are a bit different to standard road bikes, and some of the different features can make them a great choice for commuting.

Let's start with the frame

Generally cyclocross frames are made from either aluminium or carbon, with the latter being usually the more expensive. This is to keep the bikes lightweight for racing and make them easier to carry. 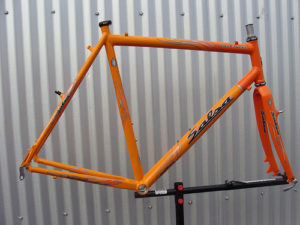 But it's the fame geometry which is the more subtle difference. When compared to a regular road bike the cyclocross frame has a shallower drop from the saddle to the handlebars, a longer wheelbase, slightly less acute frame angles and a shorter top tube.

These little differences result in increased stability, greater clearances and a more upright riding position which is better for riding in traffic. This means cyclocross bikes can be ideal for a commuter still looking for the speed of a road bike but with a more stable handling and a comfier ride.

Some cyclocross bikes come with eyelets for racks and a panniers, but they’re not that common. If you have a lot to carry on your commute and are thinking using racks and pannier might be your luggage of choice you should definitely check the frame for eyelets.

Because cyclocross races are off road, cyclocross bikes have much more clearance around the wheels to cope with the muddy conditions. Without this the bike would easily grind to a halt if the wheels got gunked up with mud during the race. The clearances are around the forks, the seatstays and the chainstays, seat tube and bottom bracket region than on a road bike.

Road bikes rely on caliper brakes for their stopping power, but these again have limited clearance. To prevent the brakes getting clogged up with the worst the weather dish out, cross bikes use disc or cantilever brakes.

Cyclocross bikes have wider tyres with a knobbly tread pattern, these are more suitable to off road  and provide traction through mud, sand, water and snow than the slick tyres found on a road bike.

Cyclocross bikes have different gearing ratios than road bikes, again to cope with the different terrain and slightly slower speeds. Up front cyclocross bikes normally have a compact double chainset and a fairly wide range cassette. This results in quite a low ratio for high speed road riding but for vast majority of commuter routes the lower ratios are great.

The brake and gear cables on cyclocross bikes take different routes to that of a road bike. To keep the bare cables out of the mud the cables are routed across the top tube rather than on the down tube. All internal cable routing is become more common which provides even more protection from the elements.

So, if you’re looking for a bike that can handle trails as well as tarmac, a more upright riding position than a road bike but is still fast and lightweight? Then cyclocross commuter bike could be ideal for you.