You are here: Home / Bikes / Types of Commuter Bikes

Whether your new to cycling or returning to the sport, a trip to your local bike shop can be a confusing experience. The world of cycling has moved on a long way since the days if the ‘racer’. Now, theres so much variety available, with different types of bikes for the road, off road, touring and racing. Picking the right bike for you might seem daunting. Thankfully its not as difficult as it might seem, we’ll explain the pros and cons of the types of bikes you should consider for your commute. 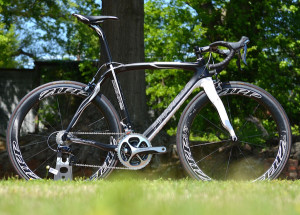 As kids, most of us used to call them racers. Road bikes have moved on significantly over the years. These days they are super light and very fast. Modern road bikes have dropped handle bars, thin wheels and tyres, and a range of gears. Road bikes can be used for commuting where your journey is by road (or very good quality cycle tow path). As well as being fast road bikes tend to have an aggressive body position for racing, which might not be the most comfortable for everyday commuting. If you plan on using panniers for your commute its a good idea to check if they will be able to mount to the bike before you buy it. 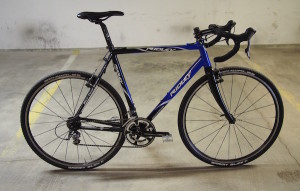 Cyclocross bikes may look like road bikes, but they are designed to take on muddy off-road riding. They are much tougher and more manoeuvrable than a road bike, which makes them very commuter-friendly. The riding position is also usually a little less aggressive than a road bike making them more comfortable. They are generally lighter than mountain bikes and hybrid bikes, and faster on road because of skinnier tyres and drop handlebars. If your commute route takes in some rough tracks as well as the road then a cyclocross bike could be the one for you. 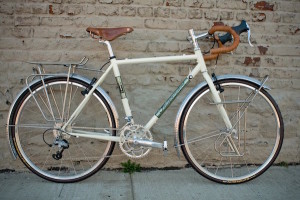 Again, Touring bikes are similar to road bikes but they are designed for endurance riding rather than racing. They are more comfortable versions of race-orientated road bikes and feature more relaxed geometry, frames designed tuned to smooth the ride and capacity for wider tyres. Touring bikes also usually feature all the lugs and mounts for panniers and fenders. If your commute is road based but your looking for a bit more comfort than a road bike, then look no further than a Touring bike. 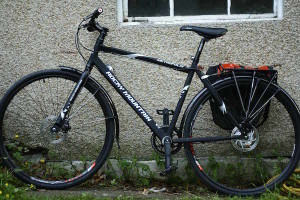 If a cyclocross bike is a road bike with off road features, then a hybrid bike is a mountain bike with road features. They have smooth tyres for high speed on road but are comfortable and strong enough for rough gravel cycle paths and bumpy terrain. Hybrid bikes have a more upright riding position which is more comfortable and offers greater control but can be a bit of a drawback for speed. Go for a hybrid if your commute is on road and good quality cycle paths, but if you prefer comfort to speed. 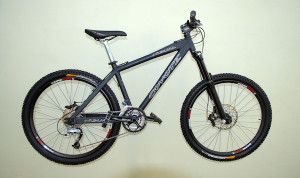 Mountain bikes can fall into three categories, Rigid, Front suspension and full suspension and are designed to take whatever off road trails can throw at them. This also makes them generally heavier than the other bikes here.  To take on the rough terrain they have closer gear ratios to make make crossing rough terrain and riding up hill easier. The low gearing, increased weight and rough knobbly tyres can really sap your speed when riding on the road. If your commute 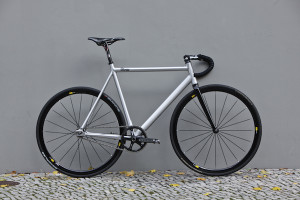 Single speed or fixie bikes are the epitome of simplicity in cycling. They have as the name suggests a single gear, and therefore a big reduction in moving parts. This can make them cheap to buy and easy to maintain. But the lack of gears can make them very tough for hilly rides. A fixie is slightly different to a single speed,  fixed gear bikes lack the ability to freewheel so you can’t coast during the downhills, which takes a while to get used to. Single speed and fixie bikes are very popular for inner city commuters and have a cult following, but unless your ride to work is relatively flat, or you have a high level of physical fitness, a cyclocross or hybrid bike mike make things easier. 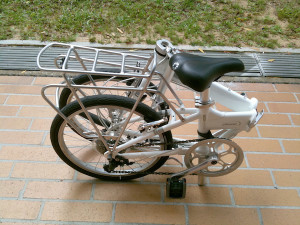 As the name suggests folding bikes are fully functional bikes that can be folded up into small compact package. This makes it much easier to bring them inside or on public transport. If you don’t have secure storage for your bike at work, then a folding bike can easily live under your desk or tucked out of the way in a corner. Similarly they can be really handy if you live in a more compact home and don’t have plenty of space to store a full size bike. Folding bikes have different sized wheels and this is one of the factors that affects the folded size of the bike. Whatever the folding mechanism, the size of the wheels is fixed, and so bikes with smaller wheels often offer the smallest folded size. But the wheel size also affects the ride characteristics of the bike, smaller wheels offer better acceleration, where as larger wheels offer higher top speeds. In short, folding bikes are great if you’re looking to do part of a longer commute on a bike, like riding to the train station, for example. 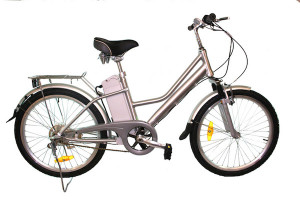 Photo by Self Trading

Electric bikes have an electric motor and a battery to help make cycling easier. You still need to pedal on an electric bike but the motor can help as much or as little as you need it. That little bit of help can really make a difference for commuting and can make you feel like you’ve got a constant tail wind pushing you along. this could make a long or too-hilly commute doable, or riding to work every day of the week rather than just when you’re feeling top of your game. With the additional components needed for an electric bike this opens up more variety on parameters like motor location, battery type and propulsion method. There are also rules and regulations for electric bikes, so its a good idea to check these out before making a purchase.